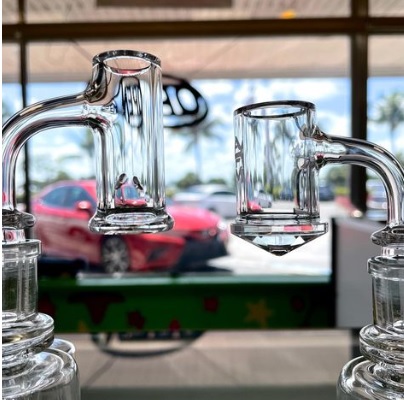 If you’re new to the smoking scene, visiting one of our smoke shops in South Florida can be, admittedly, overwhelming.

Our shelves, walls, and cases are lined with spoon pipes, water pipes, grinders, rolling papers, and other smoking accessories – including dab rigs, which are popular and only becoming more popular with the spread of the practice of vaporizing concentrates.

On the other hand, if you’ve been at this a while, you might be wondering where all the nail rigs have gone. They are being replaced by a (dare we say) superior type of rig known as a banger.

Let’s take a look at what this all means, and why most dab riggers nowadays prefer the modern banger as an alternative to the classic nail rig.

What Makes Concentrates So Popular

Dabbing, the process of vaporizing a “dab” of concentrates, is an effective, economical way to vaporize herb concentrates. Concentrates are powerful, clean, and discrete, too.

Probably the most popular way to vaporize concentrates is with a dab rig. Traditionally, users could improvise a method for vaporizing concentrates or use a commercially available solution known as a nail rig.

How a Nail Rig Works

A nail rig is basically a modified water pipe that has a (typically titanium) nail in place of a glass bowl. Basically, you heat the nail with a torch or coil, allow it to come to an appropriate temperature, and then dab a bit of oil or concentrate on the nail with a dab tool.

The nail will vaporize the oil or concentrates, which can then be inhaled through the water pipe.

Using a titanium nail rig could be very messy and imprecise, and if that weren’t bad enough, it takes a bit of skill to get it right. Titanium nails also were likely to transfer a less than pleasant flavor to your oils or concentrates, so if savoring the “true terpenes” of a blend is what you’re after, that’s another drawback to the nail rig.

As a result of these considerations, there is a modern alternative that has all but replaced the classic nail rig: it is called a banger, and it is superior to the nail rig in more ways than we have yet mentioned.

How a Banger Works

Like a dab rig that uses a metal nail, a banger rig also uses a water pipe to inhale the vaporized oil or concentrates. However, instead of a nail, a banger rig uses a small glass attachment that looks something like a bowl or bucket.

These “bangers” are special inserts that are compatible with water pipes and are available in various male and female sizes, including standard sizes such as 10mm, 12mm, and 14mm, as well as others.

Bangers, like nails, can be made of metal, but they are typically made of ceramic, quartz, or glass, just like the bowl of a water pipe would be.

The process for using a banger rig is similar to that used by a nail rig, but much easier and more straightforward. The banger is inserted into the water pipe, and then heated, either with a torch or an electric coil.

When it reaches the proper temperature, a dab of concentrates or a drop of oil is dropped into the banger. On contact with the hot surface of the banger, the concentrates or oil will vaporize, and can then be inhaled. Some dab rig “operators” place a special carb cap over the banger after the oil or concentrates vaporize in order to effectively capture them before inhalation. 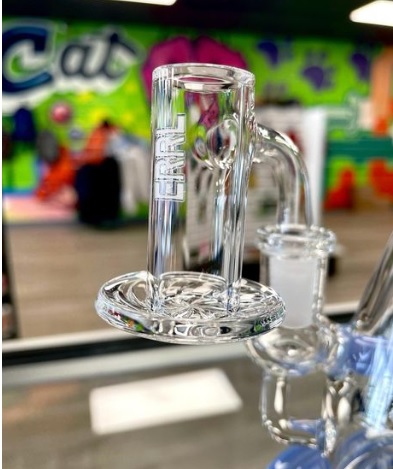 Other than the fact that titanium nails are easier to clean and generally more affordable than bangers, bangers offer a number of pronounced advantages.

Both glass and ceramic bangers are relatively affordable and durable (though not as much as a metal nail) and are resistant to cracking due to high temperatures.

Quartz and glass bangers are also relatively easy to clean and won’t transfer any flavors to the vapors, so you can enjoy a cleaner, purer experience when dabbing with them.

Most importantly, however, the main benefits of bangers instead of nails have to do with how much less effort and skill it takes to use them. It takes a good deal of trial and error to “get it right” with a nail rig, and almost none with a banger.

With a banger, you just heat it up, drop in the concentrates or oil, carb it, and rip. It’s very user-friendly and effective, less difficult to “figure out,” and unlikely to create a mess. There are a wide variety of different carb caps that can be used with bangers to help capture the vapor and provide thicker hits.

Additionally, banger rigs, especially those that are compatible with electric coils, are precise and efficient. Unlike the use of a torch (which some dabbers still use anyway) coils will heat up the banger to a very precise temperature before concentrates are applied, delivering a consistent vaping experience every time.

Still Have Questions? Come Visit One of Our Smoke Shops in South Florida

Thinking about retiring the old, torched dab nail and ushering in a new era of purer flavors and more potent hits with a banger rig? If so, you’re not alone. Vapers all over the country are doing the same and nail rigs are more or less disappearing.

Whether you want to learn more about banger rigs, have additional questions, or just want to see what sorts of bangers we sell, come check out the quality products at one of our smoke shops in South Florida.

© 2023 The Hip Cat Smoke Shop. All Rights Reserved. The Art of eCommerce™ by 1Digital®